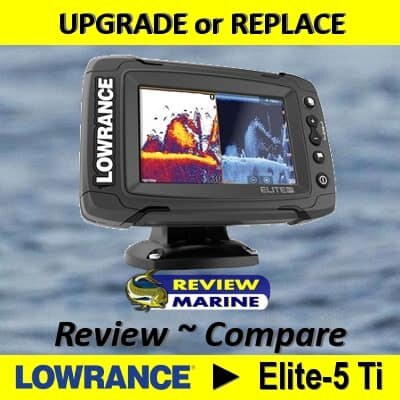 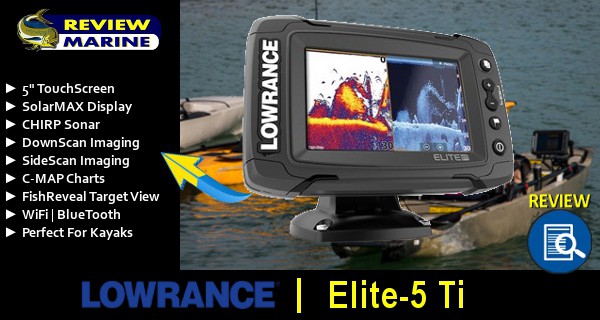 The Lowrance Elite-5 Ti – matches a Lowrance 5″ SolarMax display and easy-to-use touchscreen controls with premium sonar features and powerful performance, at a very affordable price. The resolution runs  800 x 480, is pretty bright, and has good viewability from all angles.

Excellent Charts & Mapping – include a built-in worldwide base map plus C-MAP charting covering 11,000 lakes and U.S coastal areas along with support for a bunch of additional third-party chart options like premium C-MAP and Navionics.

Support forNMEA0183 – is also included for data sharing between NMEA0183 legacy devices. The Elite Ti is not networkable for sharing sonar. You would have to move up to the Elite Ti2 which has sonar sharing via WiFi.

The Built-In Sonar includes a high-performance 500-watt CHIRP Sonar, DownScan, SideScan all within one TotalScan transducer. 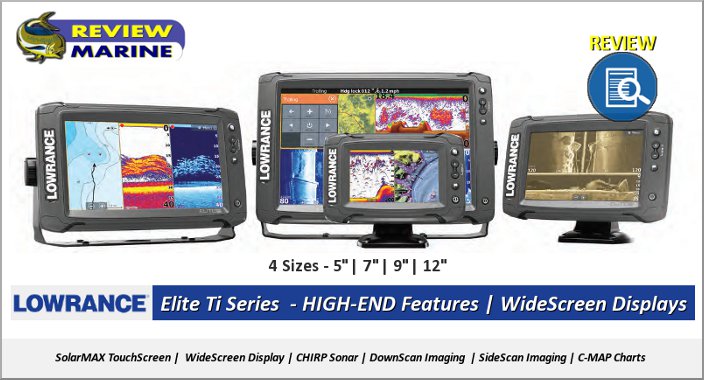 The rear connections differ somewhat on the 5″ unit and it also does not have support for SmartSteer trolling motor control.

Here are the feature differences between all four families. 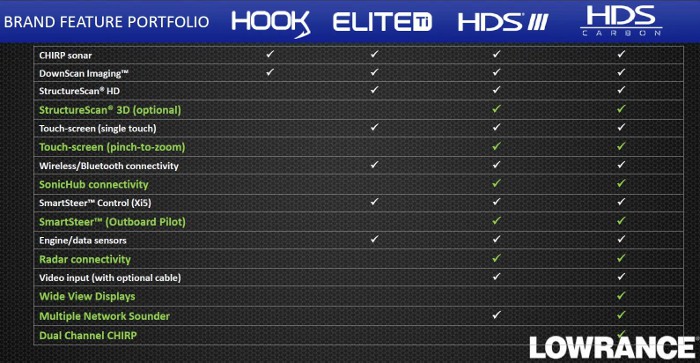 The image below shows the differences between the Elite Ti and the newer Elite Ti2.

Keep in mind that the Elite-5 Ti does not support SmartSteer Control for the Xi5 trolling motor or NMEA 2000 Engine data. 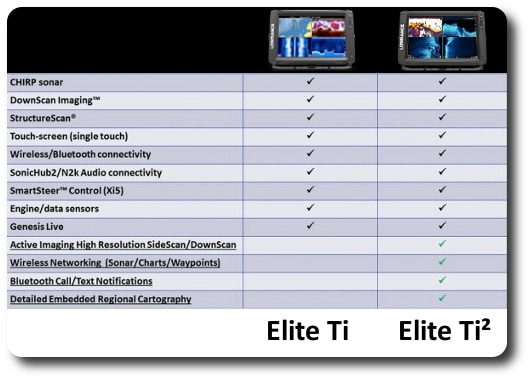 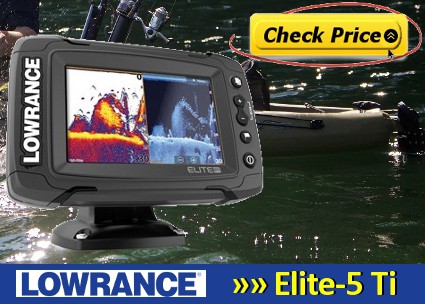 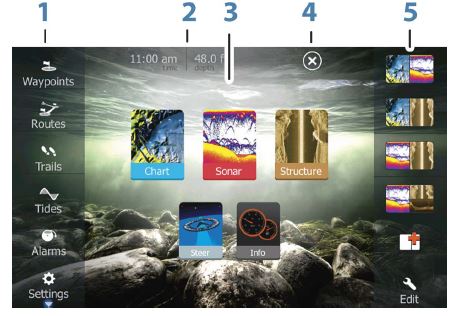 EASE-OF-USE –  The Home page is accessed from any operation by a short press on the Pages key.

1.  Tools – Select a button to access additional options, or for browsing stored information.

3.  Applications – Select a button to display the application as a full-page panel.

4.  Close button – Select to exit the Home page and return to the previous active page.

5.  Favorites – Select a button to display the panel combination. 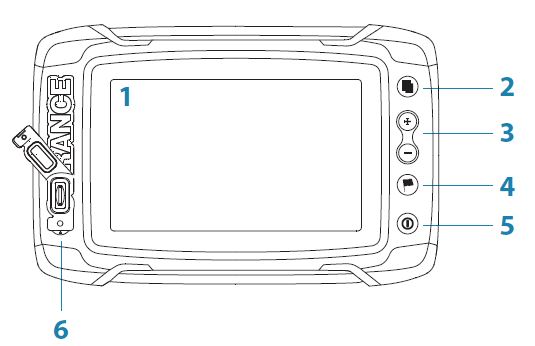 Wireless Connectivity – features include Power-Pole shallow water anchor control, remote viewing from anywhere on board with your smartphone using the Link App, and access to online software updates.

Network Sharing – The Elite Ti Series is not a network capable model for sharing sonar.

NMEA 0183 Support – for limited data sharing between things like other GPS units, VHF, and legacy autopilots.

Built-in Bluetooth – wireless technology gives you the ability to connect the unit to Bluetooth-enabled devices for things like media. 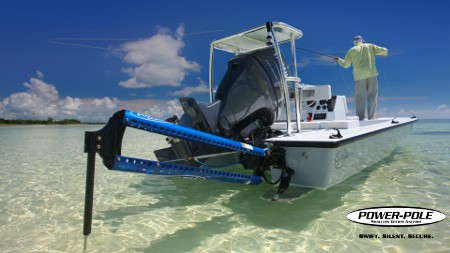 Power-Pole Connectivity – You can use the built-in wireless connectivity of the Elite-5 Ti display to control one or more Power-Pole® Shallow Water anchors, equipped with the C-Monster Control System.

You get independent or simultaneous control of multiple power poles to make manual or automatic adjustments directly from the display. 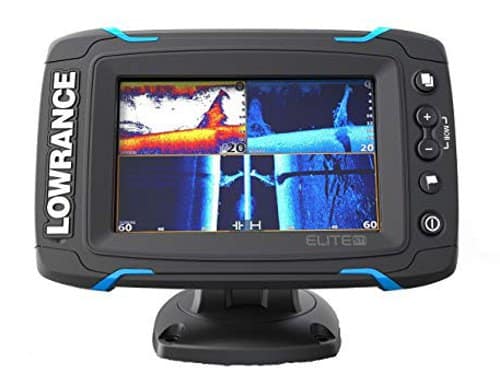 Transducer options include 4 choices the TotalScan which is the all-in-one transducer for Med/High CHIRP and StructureScan HD with SideScan and DownScan Imaging within a single transducer installation.

Traditional CHIRP Sonar – provides a view of the water column and bottom for looking for fish and structure. Broadband can use CHIRP (Low/Mid/High) frequencies in 50/83/200kHz with a power output of 500 watts. The maximum working depth is about 1000 Feet using (mid/high CHIRP).

Here is an example of the traditional sonar view. 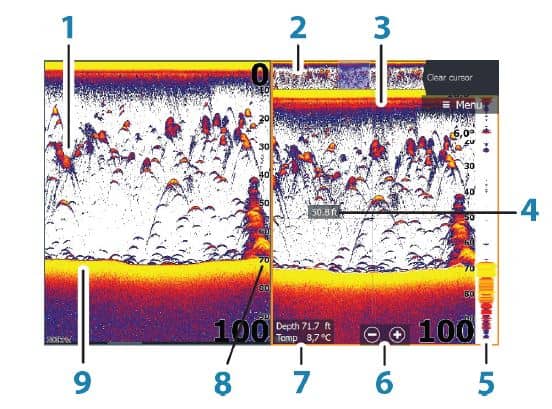 StructureScan HD uses high frequencies in the 455/800kHz range to provide a high resolution, a picture-like image of the water column and the bottom. 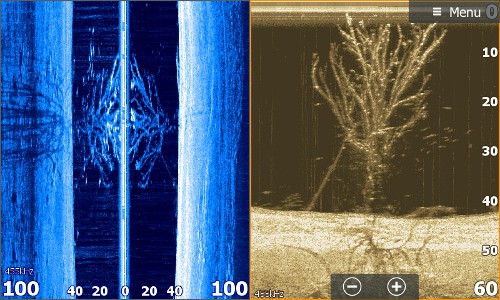 Trackback – gives you access to your sonar history. Easily scroll back through the CHIRP sonar, SideScan, or DownScan Imaging history and mark the spots that you want to go back and checkout.

FishReveal – makes fish easier to see. By combining CHIRP sonar fish arches with the high-resolution DownScan Imaging you get a view to distinguish fish easier. 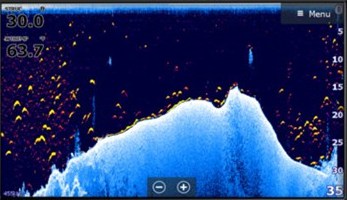 FishReveal overlays CHIRP sonar and DownScan Imaging on one screen eliminating the need to have a two-panel split-screen layout. 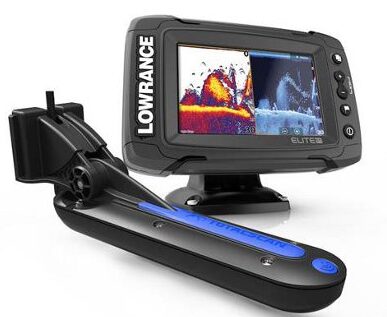 The 4 Transducer options include the TotalScan all in one, Med-High Skimmer, the LSS-HD StructureScan HD, and the HDI Transducer.

Here are the choices:

1. Med/High TotalScan is the all-in-one transducer for Med/High CHIRP and StructureScan HD with SideScan and DownScan Imaging. This one is the most popular solution.

3. LSS-HD StructureScan HD transducer is for SideScan and DownScan Imaging only. 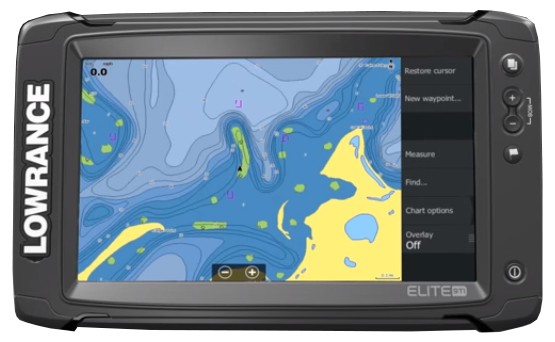 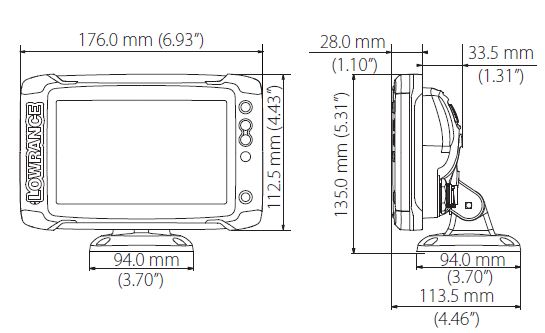 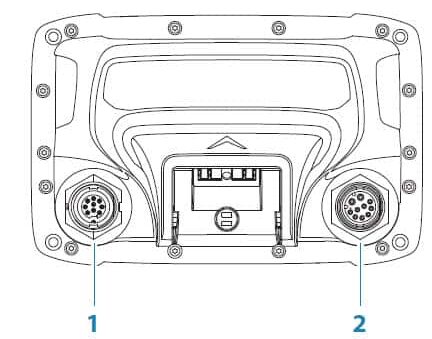 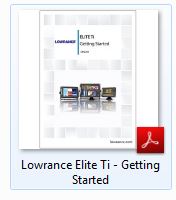 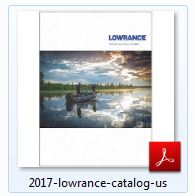 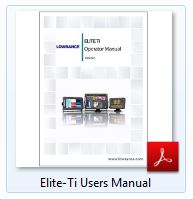 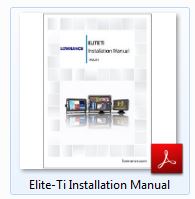 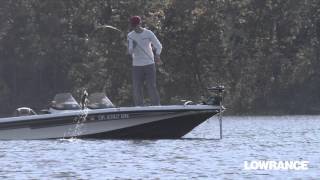 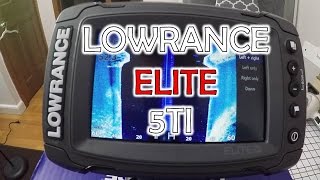 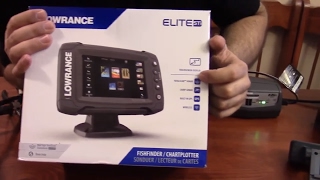 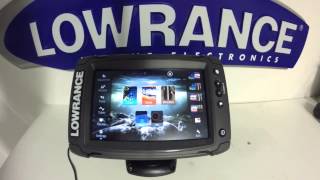 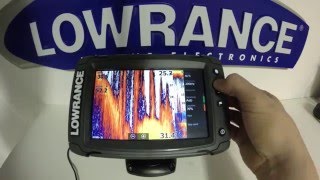 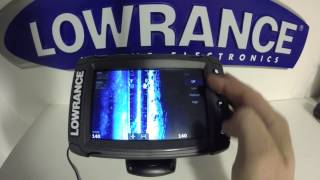 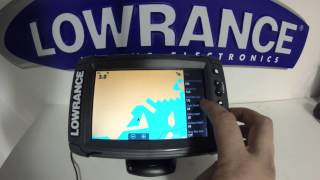 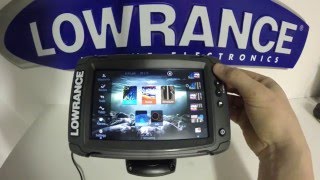