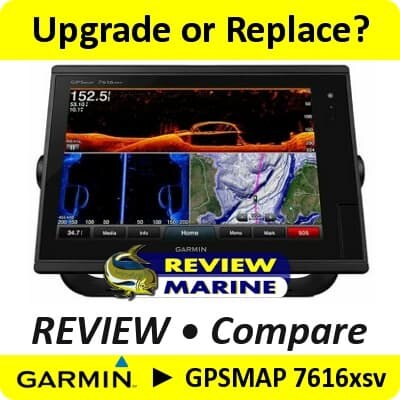 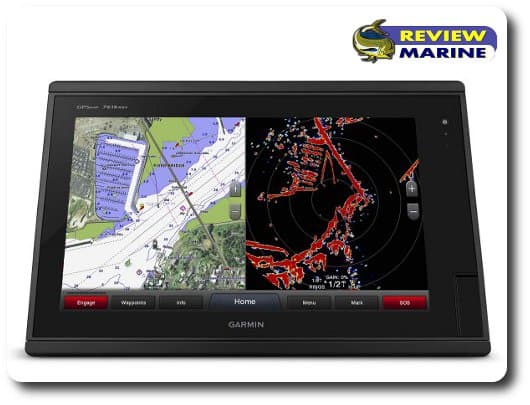 Its internal 10 Hz GPS. GPSMAP 7616xsv is fully network capable, including Garmin Network and NMEA 2000, and offers the conveniences of built-in Wi-Fi® connectivity.

The 7600 series also offers an SOS safety feature, an onboard PDF user manual and you can also import and export waypoints and routes via GPX.

A pre-race guidance page shows your virtual starting line on the chart, along with data fields showing laylines, time to burn before the start, and a race timer that can be synchronized across all your networked Garmin GPS products.

Includes CHIRP ClearVü and CHIRP SideVü – A scanning sonar that provide nearly photographic sonar images of fish and structure that passes below and to the sides of your boat.

Customize your screens with Safety Shading that allows you to shade all depth contours shallower than your boat’s safe depth. Fishing charts emphasize bathymetric contours with less visual clutter on the display.

You have a choice of standard 2-D direct overhead or 3-D “over-the-bow” map views for easier chart reading and orientation.

Shallow Water Shading that allows you to designate a minimum depth; interstates, highways, general roads and bridges; designated fishing areas; and points of interest, such as docks, boat ramps, marinas and campgrounds.

Plan a trip or prefish a lake, and ActiveCaptain will automatically sync with your chartplotter. Even get notifications for software updates, and decide when to download them on your device.

Enhanced Auto Guidance – Just enter the location where you want to go and patented Garmin Auto Guidance² technology instantly searches through relevant charts to create a virtual pathway on the display.