This week, we are comparing the Lowrance Elite Ti² with the Raymarine ELEMENT HV Series.

Specifically, a comparison of the series and then a side by side of the 7″ 9″ and 12′ models

So… How are they different. The basics.

l Screen Brightness – The Element screen comes in a little but brighter than the Elite Ti² by about 300 nits across all 3 sizes.

l Mounting Options – The Element can mount via a bracket or flush to the console. Elite Ti² units can flush mount and bracket mount also but the bracket is quick release for quick removal and storing.

Only 15 tracks for the Element is a bit of a negative for me as I store and use bunch of tracks for backwater trips and could see this getting used up pretty quickly.

l Radar Compatibility – The is a big plus for the Element as it can connect to a Raymarine Quantum radar via WiFi. The Elite Ti² doesn’t  support radar.

l Wireless Networking – The Element can network 2 units together to share data but only by wire and only waypoints.

With the Elite Ti² series you can connect 2 units together via WiFi to share sonar, waypoints and routes.

l SONAR – This in my opinion is definitely the biggest difference between the models.

The Element series has a more advanced sonar with the addition of 1.2 MHz HyperVision on DownVision, SideVision and RealVision 3D.

The Element HyperVision 1.2 MHz channel only works to about 90-100′ but clarity for finding structure and fish is outstanding. The Chirp sonar uses 200kHz @ 100W.

The sonar in Elite Ti² series is excellent and maybe a better choice if much of your fishing is in deeper water.

; See the tables below for detailed comparison.

So which one do I go with?

Lowrance Elite Ti² – If you want a touchscreen chartplotter with and excellent fishfinder and plan to share data between two units via wireless networking, then the Elite Ti² is the choice.

It’s not  networkable but you can share sonar, waypoint and route data between Elite Ti² displays with a wireless connection. The Element will only share waypoints via NMEA2000.

ELEMENT HV –  If you only plan to run one unit, don’t need a touchscreen and want superb next level sonar fishfinding capability with 1.2MHz Hypervision and Realvision 3D then Raymarine Element HV is the ticket. 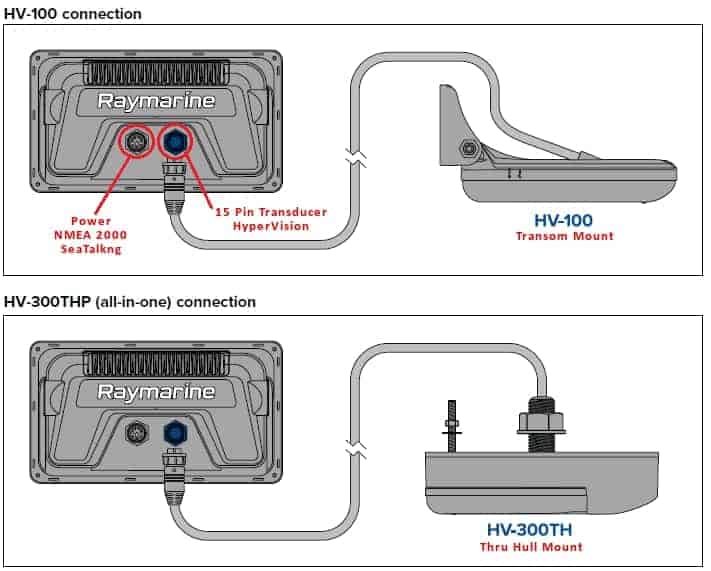 How are the Elite-12 Ti² and ELEMENT 12HV different?

Below are differences side by side:

How are the Elite-9 Ti² vs ELEMENT 9HV different?

Here are the differences:

How is the Elite-7 Ti² different from the ELEMENT 7HV?